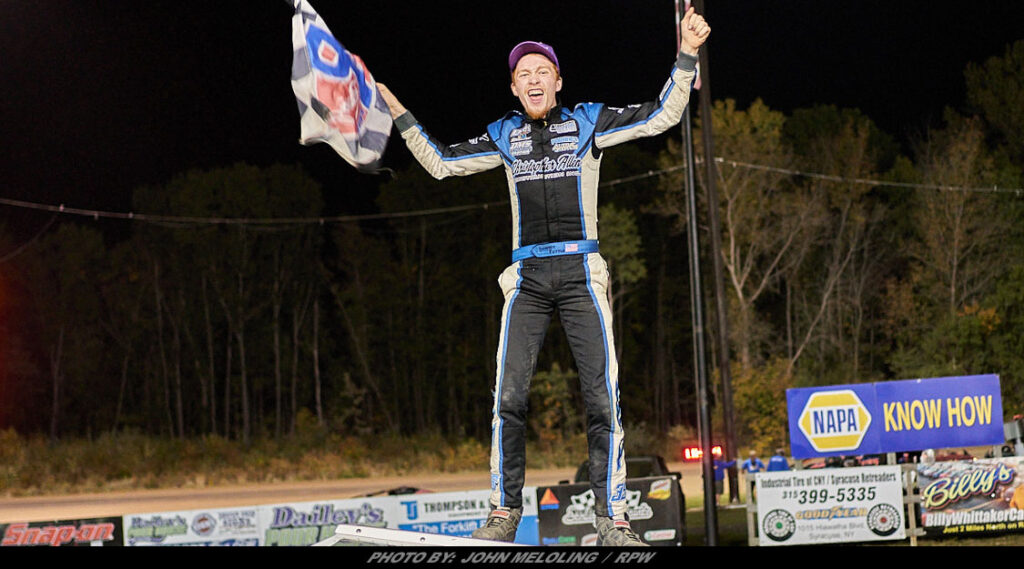 Story By: JOE GRABIANOWSKI / DIRTCAR – BREWERTON, NY – Escaping the clutches of lapped traffic with five laps to go, Cameron Tuttle had a comfortable lead, but was unaware of the furious drive coming from behind him.

Zach Sobotka, the 2021 Brewerton Speedway Sportsman Modified track champion from Parish, NY, cleared the pack of slower traffic in front of him and set his sights on leader Tuttle with just three circuits remaining. By the wave of the white flag, Sobotka had reeled Tuttle nearly all the way in and knew it was time to make a move.

“Coming out of Turn 2, I didn’t think I had enough for [Tuttle] to even get in there,” Sobotka said. “I just drove in wide-open pretty much going into 3.”

With one swift motion, Sobotka uncorked a slide job on Tuttle in Turns 3-4. But Tuttle held strong on the top side and denied the pass on corner exit, zooming by Sobotka with the lead and the $1,000 Hurricane Harvey 30 check at the stripe.

“That was the best race I’ve ever been in,” Tuttle said.

Getting into Turn 3 on the final lap, Tuttle had just realized Sobotka was coming.

“I thought I heard him coming out of Turn 2 on the last lap, and I didn’t see [Sobotka],” Tuttle said. “I was trying to look up at the [DIRTVision big screen] up there, but I couldn’t see him, so lap car around. Then, he dove under me, so I just kept it to the wood on the top and it was a drag race to the line.”

After battling hard to get on the podium in the final circuits, Sobotka had zero intentions of settling for second once he got out of lapped traffic.

“I was just trying to get to [Tuttle’s] bumper and see what I could make happen in Turns 3-4,” Sobotka said. “If I was a little bit closer, I might have been able to do it, but it was definitely close.”

Tuttle had led since the drop of the green and made quick work of traffic with a racecar setup to his liking. He lost barely any ground to the rest of the field in the first 20 laps, even with multiple lane changes to get through traffic.

“Going through lapped traffic, I could put it on the bottom, I could put it in the middle, and it would still get the drive off the corner that I needed,” Tuttle said. “Multiple lanes to race in made for a phenomenal race.”

The win was the second of his Sportsman Modified Series campaign this season after capturing the Western USA Region points title. He now turns his attention to qualifying for his first career Chevy Performance 75 appearance at Oswego Speedway on Friday.

“It’s a huge confidence booster going into tomorrow,” Tuttle said. “This is our first time going to Oswego, and we haven’t had time to travel around this year to actually see how the car’s gonna do against all these guys.”

Sobotka came home second after a drive from ninth to a near victory in the final corner. One more caution flag, and he said the finish could have been different.

“I saw the flagger give five-to-go and I was stuck behind a couple lap cars, and I split ‘em all three wide and kinda slid them,” Sobotka said. “I feel like I needed a caution really bad.”

Will Shields hung on for third while Brian Calabrese and Wednesday night’s winner Chris Mackey completed the top-five. 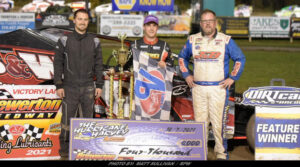 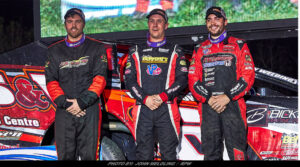 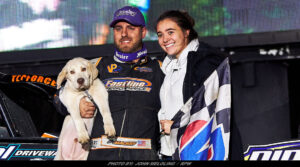